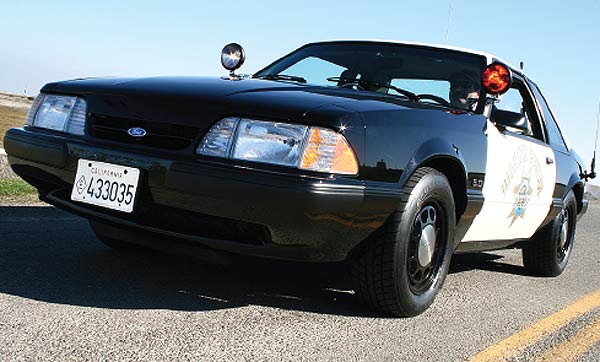 The Mustang Special Service Package was originally known as the Mustang Severe Service Package, and was conceived for limited use by the California Highway Patrol in 1982. Released as a limited law enforcement option package in 1983, it was renamed the Special Service Package (SSP) and utilized by more than sixty local, state and federal agencies during its 1982-’93 production run. Based on the “GL” or “L” (’82-’84), then the “LX” (’85-’93) model Mustang coupe, the SSP package contained unique standard and optional items not available on retail models. Approximately 15,000 SSP Mustangs were built by Ford from 1982 to the end of production in 1993.

Michael Catalano of Aptos, California is the proud owner/caretaker of this super cool 1988 Mustang that was a full duty CHP unit. We’ll let Michael tell you his story…

I finally found my CHP Mustang in 2001, and it was an exceptional restoration candidate. It had a long and documented service history, was blessed without the typically awful repaint, and had only been in the hands of two different police car collectors who left it completely unmolested (sadly not the case with most of these cars in the used market at the time). I immediately began the restoration process, starting with the basic mechanicals. Luckily the car was in great shape in this respect. 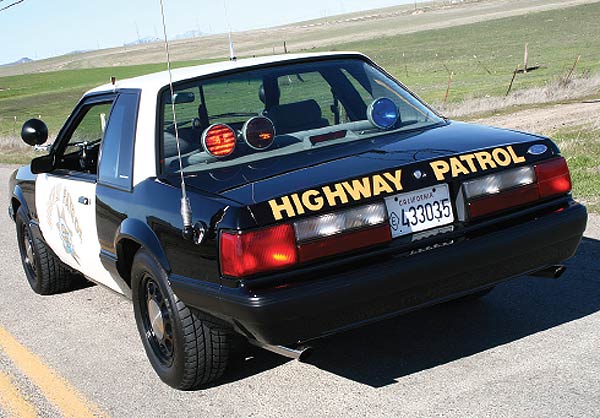 With 100k well maintained miles on the clock, the only major items done were rebuilds of the suspension, brakes and steering, replacement of the fuel tank and tires, and a good tune up to get it running and driving virtually like new. The body and interior were another story, as the interior, paint and all of the soft trim were highly deteriorated from over 13 years of brutal Central Valley sun exposure. 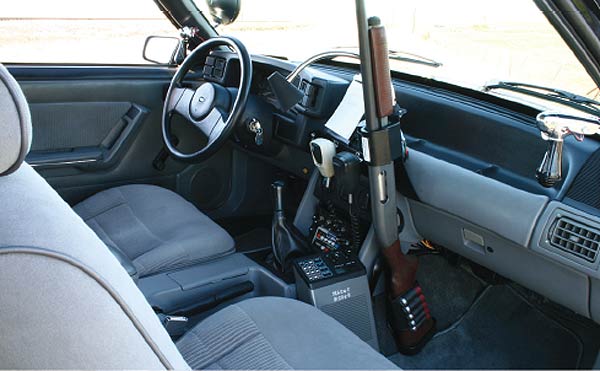 Over the next four years, I collected the information, parts and equipment necessary to complete the project while driving occasionally and showing the car at Ripon in the Daily Driver class. I also worked on getting an audience with the CHP to present my case and ask permission to do an official restoration. I finally got that chance in 2005 when a quick meeting with then CHP Commissioner Dwight “Spike” Helmick (himself a genuine gearhead – he owns and shows a really nice ’60s Ranchero) was arranged through the CHP contacts I had cultivated. The meeting went very well and the outcome was positive. A short time later, I was able to sign the requisite agreement with the CHP, which among other things stipulates how and when the car can be operated on public roads. Now that I had the green light to proceed with an “in-service” restoration, I moved as quickly as possible to get my car into the body shop.

Once back from serving its nearly half-year sentence in “paint jail”, now sporting a pristine body and its original black and white paint scheme, the car was treated to extensive interior work, and the equipment and decal installation. A short three months later I was able to enter the near fully restored car in the 2006 Ripon police car show. Since that first showing, I’ve been collecting more bits and pieces of miscellaneous CHP equipment to further enhance the vehicle when on display. Many of these items have been donated to me by current and retired CHP officers and personnel who have viewed the car at shows or events. They are truly excited and appreciative that one has been so nicely saved for posterity.