Bill Stroppe was one of America’s greatest race car builders. He won the Carrera Pan-American Road Race with Johnny Mantz in a Lincoln, the USAC stock car championship and the Pike’s Peak Hill Climb with Mercury and Parnelli Jones, and became the god of offroad racing in the Baja with Ford Broncos and again, Parnelli Jones. He built now famous drag racing cars including the Ford Thunderbolt, A/FX Mercury Comet, and the 1968-1/2 Cobra Jet Mustangs. In addition to that, he fabricated 650 special Baja Broncos for Ford to sell at dealers from 1971 to 1975, and was known to build a special car for a celebrity or a friend from time to time.

I have the good fortune of owning two of these rare pieces of Ford Racing history. A one-of-a-kind Stroppe-built 1969 Mustang Boss 302 and one of only 25 1975 Baja Broncos. In April 2005, I discovered in a barn in rural eastern North Carolina a rust free, but disassembled ’69 Boss 302. After a couple of wildly lucky breaks in researching the car, I found that it was one of the great Stroppe’s special project cars. 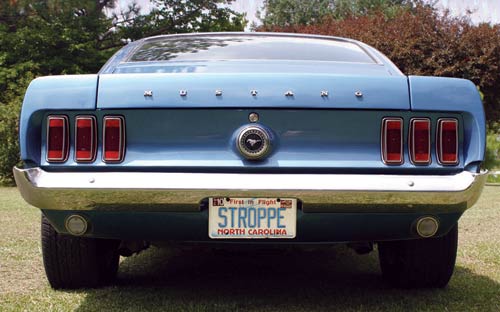 Longtime Ford racer and 1950 Southern 500 champion Johnny Mantz had ordered one of the first 11 Boss 302s, and commissioned Stroppe to build a special car for his aspiring race car driver son, Rick. The car received a four-point rollbar, competition gauges, competition shifter, and steering wheel to start with. The suspension was then upgraded with sway bars for the front and rear, coil spring mounted air bags, race shop fabricated rear spring pads, and welded on traction bars. The car’s trunk became home to the battery and an electric fuel pump. Along the way, the Mustang also received a unique graphic treatment. The signature Boss 302 stripes and black-out paint package were replaced by sleek blue paint and hand-painted (in gold leaf!) “Boss 302” on both front fenders.

You could call the Boss one of the original “tuner cars”. It also has only 11,870 miles on the clock! The restoration was more like an archeological dig. It took a lot of expertise to identify parts that were on the car and parts that had been removed leaving only markings. I received a lot of valuable technical advice from Bill Stroppe, Jr. and Lee Holman. Noted Holman-Moody fabricator Ken Thompson restored the rollbar and traction bars. The Boss 302 engine was inspected and rebuilt to stock specs by Mike Kutkuhn. The car is now reassembled and racking up mileage for the first time since 1971. 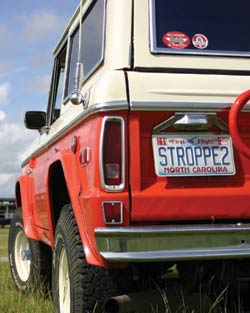 In the process of restoring the Mustang, I met Baja Bronco guru Andrew Norton, who had found a 1975 Baja Bronco that had been lost under a red paint job. The “first” Ford SUV was shipped from Ventura, California, to North Carolina where it was restored to its original signature paint scheme. This particular Baja had belonged to Ford Marketing Corp., and had been equipped with two-way and CB radio equipment. The twin boom antennas and the radios mounted under the dash give the truck a unique look.

Both the Mustang and the Bronco are driven regularly and can also be seen at the occasional car show!