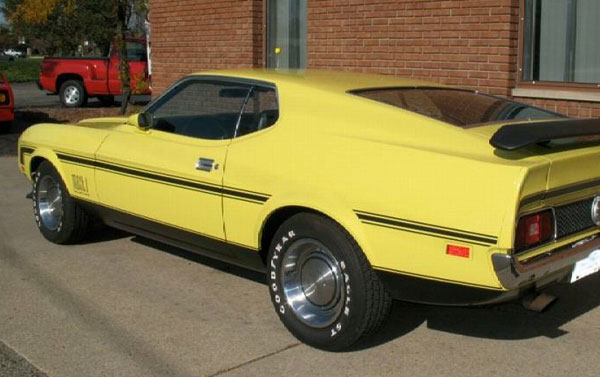 In school, a couple of buddies and I caught the car bug and realized we were becoming “Car Guys”. Not sure how we got this sickness. We all grew up on farms and had to help fix whatever was broken (or we messed up). Maybe it was all the car magazines we read. We all wanted something old, cool and fast for our first cars! Plus, they would be easier to fix than the modern 1980’s cars.

Summer of 1985, my Dad and I hopped in his truck and went a couple of towns over to look at a 1970 Mach 1 Mustang. We got there and it turned out to be a 1971 Mach 1. It was painted bright yellow and had custom black stripes down the hood. When I say custom…I mean CUSTOM! The stripes went down the hood to a point and the rear trunk lid read “OLD YELLER”! I really wanted a 1969 or 1970. So, we left and continued looking.

Christmas of 1985, I found a set of Ford keys stuck in the Christmas tree. I thought I would explode! Dad had found a 1969 or 1970 MACH 1! Not really. There was OLD YELLER sitting in the front yard. Beggars can’t be choosers and hey…it did have a 351 Cleveland in it.

I immediately started fixing the little stuff that was wrong with it like the shifter felt like it would wobble out of the floor and that massive hood would pop up at highway speed and catch on the safety latch. I drove the car all over and to and from high school. I could never get away with anything because the car was bright yellow and my Dad was a retired deputy sheriff so everyone knew me and the car. One night at a friend’s house, I fired the car up and heard the dreaded rod knock. Then, on the way to work the next morning the timing gear jumped a tooth making it a little tough to drive. A buddy and I pulled the motor and rebuilt it with a mild cam and a set of four barrel Cleveland heads out of a junkyard.

I also drove that car to and from college my first semester while wrecking it and then fixing it a couple of times. I put OLD YELLER out to pasture sometime in 1991 in favor of a 1977 Pontiac Astre Formula with a 10 bolt Posi and a Borg Warner reverse 5-speed (that’s another story for another time) that didn’t have a 750 dual-line, double-pumper Holley and got more than 8 mpg.

Times and priorities change. So, I sold OLD YELLER and two other MACH 1s to a collector in Indiana for yep… you guessed it… money for a wedding. I still have the wife and we have two great kids. She still puts up with all my car stuff and the kids like going to car shows with us.

My current project is a 1973 Camaro RS with an LS6 and a 6-speed. You can check out the progress on our Pit Stop blog. I know…it’s not a FORD. I said I was a Car Guy. I just never said where my allegiance lies!